Is this the one?

June 22, 2022
The area was quite near Claire's but not near enough for us to be in each other's pockets and, according to her extensive investigations, was quiet, near to countryside and walking areas for Toby and was unlikely to be high risk for axe murderers knocking at the door, which had to be a plus.
It also fulfilled all the requirements  that Keith had mentioned during our extensive searches. So it wasn't too near road noises, the garden was a reasonable size, there was a garage, so potential for a workshop, AND an 'office' in the house, which should by rights be a utility room for me, but I'm willing to concede that  - for now.
The best selling point, as far as Keith was concerned was that, by dint of scrutinising Google Maps, he discovered that there is a very promising looking butcher/pie shop in the vicinity. Each to his own, I guess.
And so began the process of putting in an offer, having it accepted, organising the RICS Homebuyer's report and attending to all the million and one other things involved with buying a house.
As our first potential purchase had been a non starter, our buyers were still waiting patiently for things to get underway,  so I was anxious that this procedure would happen as quickly as possible, with the result that I wouldn't be at all surprised if I have at times been put on the 'Avoid this one!' list for harassing estate agent, solicitor, removal company ...
Keith began to 'sort out' his shed/workshop and with that came the realisation that what I have been telling him for years is true. He has FAR too much STUFF! Initially, he began packing it up and stacking it in the conservatory, but that was already housing stuff from the van, which had gone to auction.
Plan B was to put the contents of the conservatory in temporary storage with our removal company and then carry on emptying the shed.
I will just add that the removal men who drew the short straw and came to do this job deserve a medal for not taking one look and running up the road as fast as their legs would carry them.
Meanwhile, lots of sorting out was being done by me in the house and many boxes were being filled. However, one area still remained untouched: 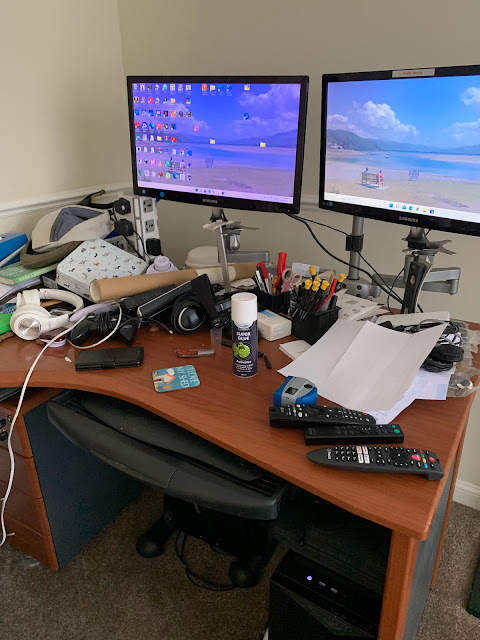 We still have work to do!

Yorkshire Pudding said…
I have the distinct impression that Keith may need counselling with regard to his squirrelling activity.
23 June 2022 at 15:35