The eyes have it!

I mentioned in one of my recent posts that I had an eye operation looming over me, which I was not looking forward to, not one little bit. I have glaucoma, but not to be relegated to the common herd of glaucoma sufferers, I also have what the specialists call ‘deep cupping of the optic nerve’. I’m still not sure about the interconnection of the two but suffice it to say, over the last few years, I have been prescribed a variety of eye drops to reduce the pressure and while this treatment has had some success, the pressures were creeping up again, so the dreaded operation was suggested - a viscocanalostomy.

“I’m very squeamish about eyes,” I said plaintively to the doctor.
“Lots of people are,” she said, “but don’t worry, it’s only like going to the dentist.”
“You’re not really selling it to me,” I muttered.
However, when you are told that the alternative to the operation is gradually losing your sight, it kind of concentrates the mind and so Christmas was spent under the cloud of ‘the operation’, in the distance like a man’s fist but drawing ever closer and looming ever larger. I know, pathetic, isn’t it? When I think of what lots of other people are suffering,  and here was I behaving like a complete baby.

Elder Daughter suggested that I ask for a sedative.
“You won’t care what’s happening to you,” she assured me, “and you probably won’t even remember.”

Yes, I forgot to mention that this ‘procedure’ is carried out under local anaesthetic and I didn’t even want to think about how they get the anaesthetic in there!

Elder Daughter very kindly came to stay overnight to take my mind off things and Keith has been an absolute brick driving me up and down for my appointments - an hour’s journey each way. I didn’t have to be carried kicking and screaming into the hospital (gold star for that!) and carefully noted all the patients coming back from theatre, looking relaxed and happy, so I began to think that maybe it wouldn’t be a fate worse than death after all. If they could do it ...

And so it proved. Sedative given, anaesthetic administered and I was wheeled into theatre.
“You’re going to have a black eye tomorrow,” said the doctor. She wasn’t joking. Apparently, it depends on how and where the anaesthetic goes in. I have still banned myself from pursuing that train of thought! I managed to survive the half hour ordeal and lived to tell the tale, albeit looking as if I have gone ten rounds with whoever the latest boxing legend is. Believe me, the photo does not do it justice at all! 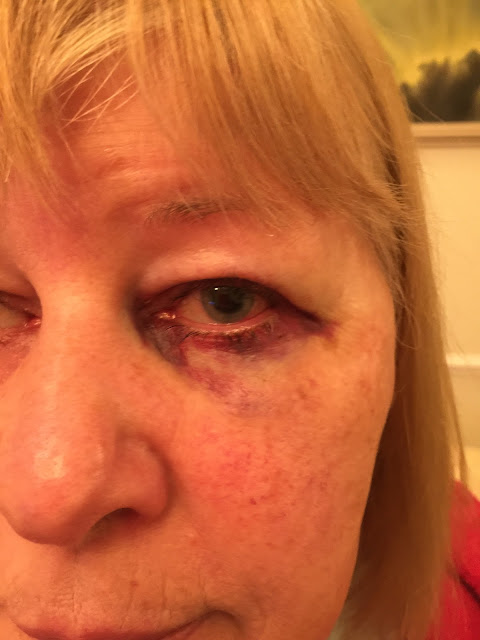 So I am now under strict instructions not to do anything energetic or any bending for four weeks and then, in a few more weeks, I get to do it all again on the right eye!

What a brave lass you were to get through this ordeal! Well done! You will need to be equally brave for the second ordeal but at least you now know exactly what to expect.

Yes, I shall know what to expect but I shall be glad when it's all over and I can get back to normal - whatever that is. :)

Lots of people squeamish about eyes? Just about the entire world I think!

But the right thing to do. I only hope I can be so brave when my time comes.

I'm having the other one done in a. few weeks and, now that I've been through it once, I should be fine the next time - hopefully! :)