August 03, 2022
The removal firm we decided to use was a pretty reputable, mid range one and we contacted them quite a while before we had a removal date as we thought it would be wise to plan ahead because of all Keith's 'stuff'. If you are not aware of the amount of 'stuff' we are talking about, have a look at  his YouTube channel and you may get some idea. Suffice it to say that the contents of a workshop, his van and half a garden shed were not going to be easy to move, so the agreement with the removal company was that they would come the day before the move to pack up his workshop, store it overnight and come back the next day to load up the house contents.
However, it soon became clear, as Keith started to pack up some of the stuff, that further solutions would be needed. Men were dispatched several days before the move to collect what had now been offloaded into the conservatory and that was taken away to be stored.
Two days before the move, the rest of Keith's stuff was taken, leaving only the house contents. Nearly home and dry, we thought.
"We'll be here at eight o'clock on the dot on Wednesday," said one of the men, leaving us in no doubt that an early start was planned for that day and we had better be ready. This van load was to be kept overnight in the removal company's facilities and driven up on the Thursday, which was our official moving day.
Wednesday morning dawned, last minute things were packed away and as much last minute cleaning done as possible.
Eight o' clock came and went, as did 8.30. When Keith and I rang, we were given different excuses: the men had 'checked in', the receptionist said, she had 'definitely seen them', followed later by,
'There's a puncture on the van. They're just waiting to get it fixed."
To cut a long and boring story short, the crew (three men now instead of two) finally arrived at 10.30 and we worked out, using our Sherlock Holmes skills, that they had probably been doing another small job on the side before coming to us.
"We might be old but we're not stupid!" roared Keith, having told them and not being contradicted, that we just didn't buy the story of the puncture.
The foreman, who had decided to play it hale and hearty and 'what's all the fuss about?' visibly blenched and stepped back as he realised he needed to add a little contrition into the mix.
There followed fervent promises to pull out all the stops and get on the road by 1pm, which did actually happen but, as Keith said, a stressful day, bringing to an end nearly twenty years of living in that house, was made all the more stressful by the events of that morning.
However, the van departed and so did we. We stayed in a hotel that night (kindly arranged for us by Kathy and Claire) and got the keys for our new abode just as the removal van arrived, to be followed the following day by Keith's stuff. 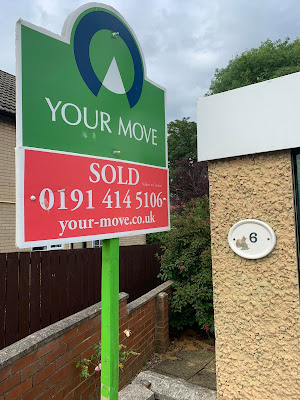 Keith now has an 'office' adjacent to the kitchen and a garage. Filling them both, as you can imagine, has not been difficult but filling them with the right things in the right places is still a work in progress.