This time last week, we were relaxing after a journey from Gretna to Gateshead and back. Confused? You will be ...
In August, we decided that a bit of a break was in order and that as I had never been to Scotland and Keith had only made extremely brief forays into Glasgow and Edinburgh, we would find a cottage for a week so that we could take da dawg as well. The cottage we finally settled on was a couple of miles from Gretna Green, in a little place called Rigg which, as it happens, had once been the home of Keith's grandfather and father; but that's another story.

Earlier in the year, Younger Daughter had become pregnant and her baby was due in mid October. However, on the morning of our first day at the cottage, I got a panicked phone call from Claire saying that she thought her waters had broken and she and her fiancé, Neil were hot footing it to the local hospital. After many long hours of is she? isn't she? how soon? etc, it was decided that she would be able to give birth normally and things were allowed to take their course. As it happened, she managed to accomplish it with nothing more than Entinox, the infamous 'gas and air' but only because the doctor couldn't get the epidural set up in time and after five attempts, it was then too late for Pethidine to have any useful effect.

So at just 12.36am last Sunday, Charlie Hugh made his entrance into the world, four weeks early but weighing a very healthy 6lb 3oz and that's why we were rushing over to see him. 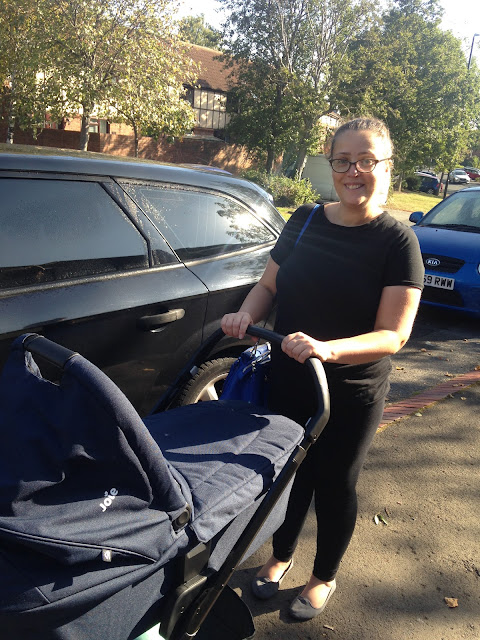 It seems that a decision has not been made as to whether his photo can appear on social media, so I am playing safe for now and just showing you this one of Charlie's first outing yesterday with proud Mum and asking you to imagine, for now, the pram containing the most beautiful baby in the world.

Well, I would say that, wouldn't I?

Uncle Hugh is smiling and nodding his approval. Congratulations, Nana!

Just what I was thinking, Dale and his first name, Charlie is after Dad.

Congratulations Granny! How wonderful that the baby's given names pay homage to your late father and your late son. You must knit him some bootees or a blanket as that is one of the main duties of a granny.

I don't answer to the name Granny, YP. Nanny is traditional in our family. It's slightly younger sounding too! ;)